Five Things That Irritate Me About Games On Facebook- Part One

Get The Mobile App

#1- I’m not really sure which of these things I’m about to list irritate me the most so this isn’t going to be a top ten count down, but this IS one of the ones that I can’t stand. Get this game on your mobile device. It pops up and promises you game booty if you download the app for your mobile, download it NOW. Go get it! Well hell’s bells- If I was on my mobile app playing the damn game I would except OH I wouldn’t need to because I’d already have it. I have gotten off my computer and the next time I was using my iPad gone to locate a stupid game. I mean, might as well get my swag. BUT- I have yet to receive anything from the 2 or 3 games I’ve actually followed through on, and what’s even worse than being told to go and get the thing, is I DID! I already have it. So quit with the pop-ups already and recognize. #2- What’s up with this Fun-O-Meter? All it’s doing is getting in the way of my playing time. Like I’m ever going to move the dial. They should have taken care of finding out which levels are the most fun for people to play during their Beta testing and leave me alone. It’s just a pain in the ass to X out of. Three seconds of my life I’ll never get back. At least the time I waste playing games is time I’ve chosen to lose. 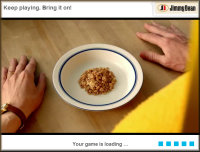 Wait On This Ad

#3- Wait on this ad? Isn’t this guy making enough money charging people to promote their posts? Or is this an ad for whoever created the game and are probably happy just making a couple of pennies after what they’re being charged to promote said game on Facebook. I don’t know how applications play out in the Terms of Service but for individuals anything you share on Facebook remains with FB in use for FB as long as whatever that may be remains in circulation, so if that’s the case, these people are screwed. They want $5.00 to get you started on just promoting a post, and you may see a spike of one person for that. They say though if you spend $400.00 that 57,000 – 150,000 of 12,000,000 people will be reached, that your budget and targeting determine how many people your post will reach. Probably about the same amount as it would have before they put a squeeze on certain types of posts being filtered into the newsfeed. Whatever the case I do not approve of ads anywhere in a game I want to play, and I can only imagine the type of fee they have for an actual game promotion and not just a lousy post. 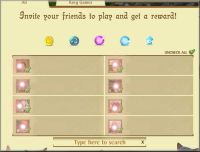 #4- Right! I mean I know a lot of them are only friends I made THROUGH Facebook but I might like to keep them. Keep bugging me to invite my friends to play games and take up another 3 seconds of my life. More if I actually was stupid enough to do this. I doubt there’s anything that pisses people off worse than getting ANOTHER game invitation from one of their new FB friends. I mean come on. These people they want you to invite are already on FB and unless they’re accessing the site from under a rock, they know these games exist and can find their way there to join or not all on their very own. Nobody ever clued these people in that these types of pop-ups are annoying as hell? There’s no way in hell I’m going to spend money to buy gold bars or diamonds or whatever lucre is being used for game extras in a game with ads, but I’m going to bug the shit out of my friends to get a few measly bingo chips or bubbles?? 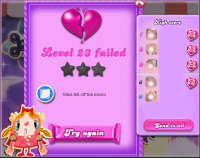 #5- There’s really not all that much that irritates me about this particular event except of course that I have just failed the level. It does bother me a bit though that they want me to bug my friends some more (after I already pissed them off getting them in here to play) for a life just because I’m a crappy player. Of course I get to give them lives or coins or dog biscuits or something in return but hey, every single damn time I fail a level? I can’t even send them anything half of the time but still I have to be confronted with their high scores. Shouldn’t I be giving lives to people who don’t have high scores and need more help even if they aren’t my friends???
The long and short of it is NOT yet finished because I have actually TEN things that irritate me but I got snagged away from my computer tonight with a quick babysitting the grandson event and I’m just not up to finishing tonight. Stay tuned for Part Two tomorrow when I am!