Home General Info Responsible Journalism; A Thing Of The Past?

Responsible Journalism; A Thing Of The Past?

The Society of Professional Journalists was created in 1909 and have the following tenets in their Code of Ethics:

Seek Truth and Report It
Ethical journalism should be accurate and fair. Journalists should be honest and courageous in gathering, reporting and interpreting information.

Act Independently-
The highest and primary obligation of ethical journalism is to serve the public.

Be Accountable and Transparent-
Ethical journalism means taking responsibility for one’s work and explaining one’s decisions to the public.

There are many other statements of expected conduct listed beneath those headings as well and make for an interesting read when considering what may be reported in various publications or seen on  different news channels.

During the last few weeks leading up to the 2020 Presidential election much attention was given to Hunter Biden from the Trump camp  about his supposed involvement with a Chinese fund and monies he may have received via that avenue and whether his father, Trump’s main opposition, Democratic candidate Joe Biden, had any knowledge of that involvement.  Also questioned was Hunter’s stint on the board of Burisma.

I was doing some research into the accusations and found an article from The Washington Post dated October 13, 2019 with a dual byline by Michael Kranish and Anna Fifield.  According to the information listed there about these two, Mr. Kranish is a national political investigative reporter, and Ms. Fifield is a former Beijing bureau chief.  With those type of credentials I imagined they’d have some real insight into the article titled, “Hunter Biden says he will resign from Chinese company board and won’t take foreign work if his father is president.”

Having done a bit of research myself into these events I thought it would be interesting to see how our information lined up.  The gist of their coverage as I’m seeing it is this-

“Archer created a new company, which he wholly owned, to form a joint partnership with a Chinese firm run by Li, according to those involved in the deal.”

“It’s not clear whether Hunter Biden did anything other than provide a high-profile name — and a connection to the vice president of the United States — that might lure investors.”

Li did not respond to phone calls, a fax, emails or a hand-delivered letter requesting comment. BHR took down its website after Trump’s comments attracted attention to the fund. The Washington Post sought to reach Archer for comment through his lawyer, who did not respond to the request.

“The archived website shows a picture of Hunter Biden, identified as a director, alongside Archer, the vice chairman, and a number of Chinese executives.”

The following is why I’m questioning the integrity of this article. How is it possible that at the same time these two reporters wrote this article I also wrote an article (questioning some things I didn’t believe The New York Times got quite right) and found the answer to one of their most important questions and I didn’t have to request that information from anyone, Devon Archer, Li, their lawyers, or otherwise?

It’s said a picture is worth a thousand words. I have to agree in this case.

In that last quote you’ll see where they’ve referenced “the archived website”.  The archived website they refer to is a capture by The Wayback Machine, or The Web Archives, whichever you’d like to call it.  One of my questions is why didn’t they dig a little deeper and find what I found?  Let me start with that first quote- I’ve left these images large so there should be no problem in viewing them.  Check the date at the top to see when the capture was taken.  Now note what I’ve highlighted in yellow; Rosemont Seneca Partners (“RSP”). This is important.  Why?  The next image should explain that. Is this the supposed company created by Devon Archer that he owns wholly alone?  I think not.  If you’ll notice the date it’s October of  2011, so it could be said that perhaps by the time BHR was created in 2013 that Hunter Biden was no longer a part of Rosemont Seneca except for the following: 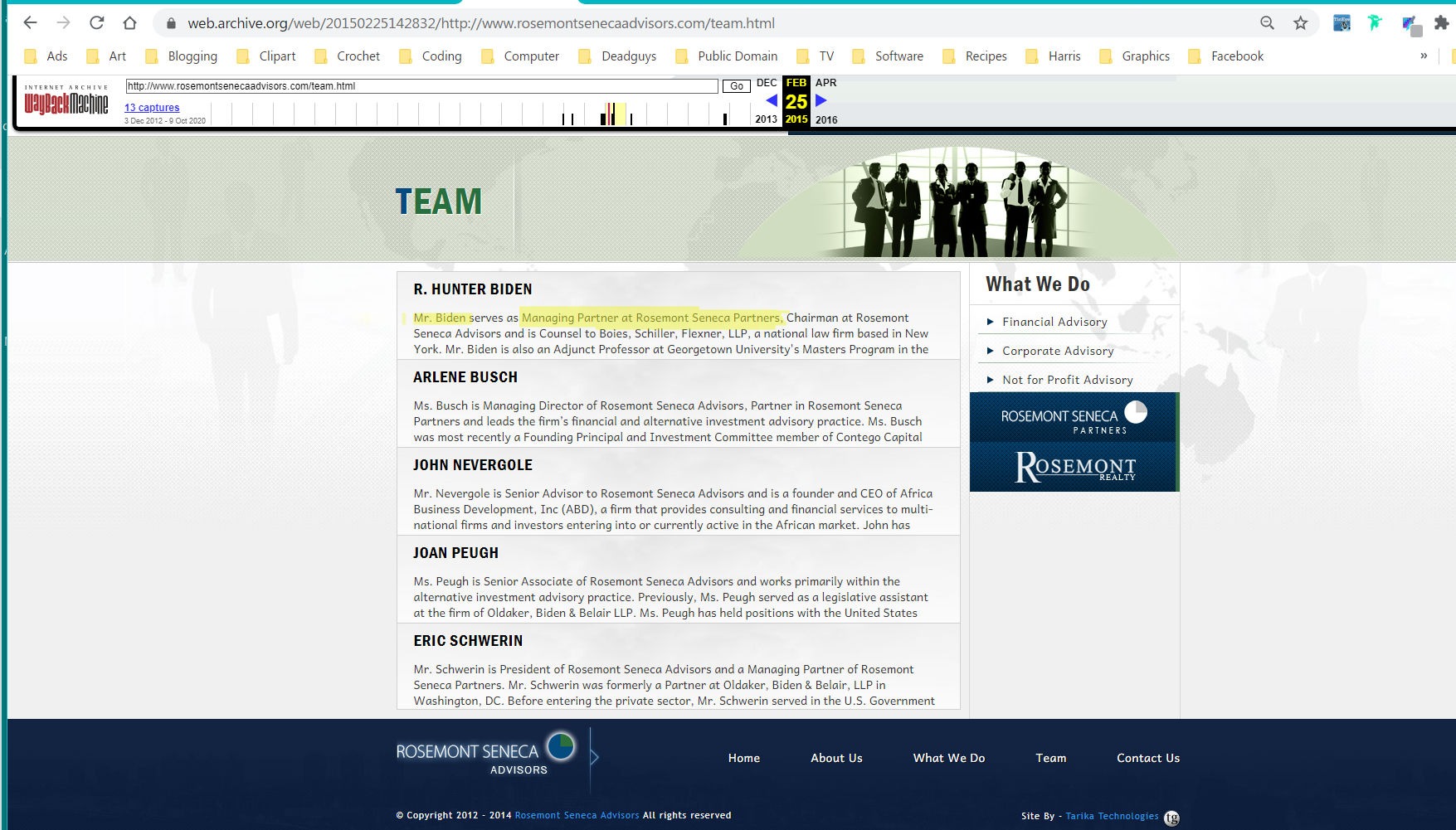 Now just to make matters more interesting, take a look at one of the original overviews from October of 2014 on the first image, and compare it to this one from March of 2018 and the other dated September of 2019.  Why was Rosemont Seneca Partners dropped from the information?  If that isn’t interesting I don’t know what is. 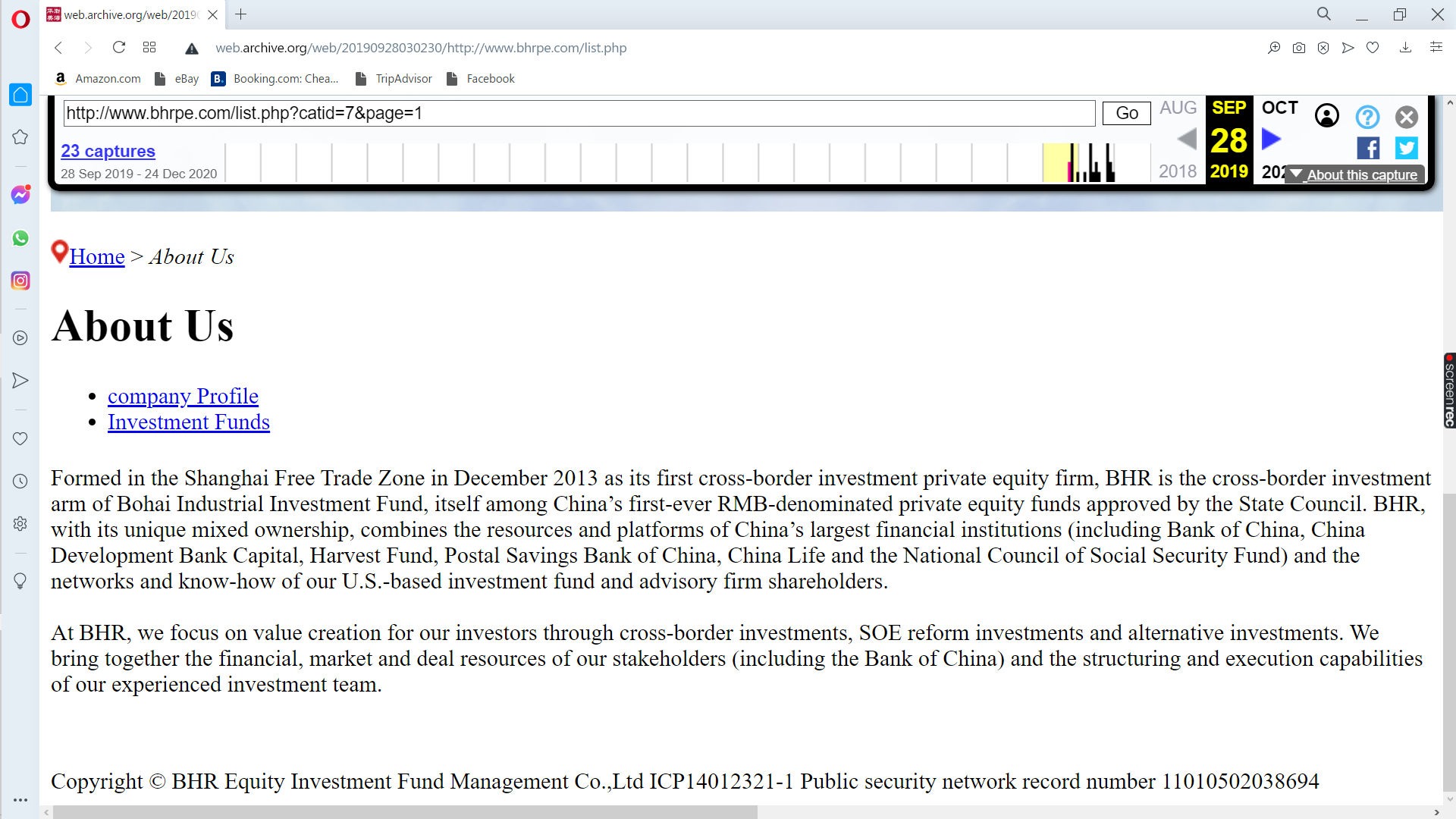 It’s not like this is some major secret that no one can locate in the “archives”.  Wikipedia even has a page dedicated to RSP. So how is it that these esteemed journalists from The Washington post managed to find archives with a picture of Hunter Biden shown on the management team page as a director (even though they just linked it), but had to ask questions of people to which they received no reply to try to arrive at the questions they were asking?  All they had to do was research a little further.

I’m not even going to touch on the Burisma portion of said article.  I’ll leave this link for the Staff report though from the following committees- U.S. Senate Committee on Homeland Security and Governmental Affairs  and the U.S. Senate Committee on Finance Majority – if you’d like to see what they have to say about it all.  Actually, I’ll give you their conclusion before the link-

The records acquired by the Committees also show that Hunter Biden and his family
were involved in a vast financial network that connected them to foreign nationals and foreign
governments across the globe. Hunter Biden and Devon Archer, in particular, formed significant
and consistent financial relationships with the corrupt oligarch Mykola Zlochevsky during their
time working for Burisma, and their firms made millions of dollars from that association while
Joe Biden was vice president and the public face of the Obama administration’s Ukraine policy.
Rosemont Seneca Thornton, an investment firm co-founded by Hunter Biden, received $3.5
million in a wire transfer from Elena Baturina, who allegedly received illegal construction
contracts from her husband, the then-mayor of Moscow. Moreover, Archer’s apparent receipt of
money for a car from Kenges Rakishev of Kazakhstan while Vice President Biden was in Kyiv is
especially concerning in light of the timing. And finally, Biden and Archer’s work with Chinese
nationals connected to the Communist regime illustrate the deep financial connections that
accelerated while Joe Biden was vice president and continued after he left office.
The Chairmen’s investigation has faced many obstacles from the minority and from
executive agencies that have failed to comply with document requests. Accordingly, there
remains much work to be done.

It’s a lengthy read but VERY interesting. Perhaps Mr. Kranish and Ms. Fifield should give it a look.
Hunter Biden, Burisma, and Corruption: The Impact on U.S. Government Policy and Related Concerns