That’s what my husband likes to call this picture. I mean, here we are interrupting this man’s busy work day, I can at least be friendly. LMAO  The Discovery Channel was even there filming that day and we also saw Fred’s son, but he was high up in a loader or some other large piece of heavy equipment hard at work.
Dakota Fred from the Gold Rush series sometimes has a lot of time to spend with visitors who happen to luck into finding this tour online, and sometimes he doesn’t, and sometimes you may not meet him at all is what we were told when we were driving up to Porcupine Creek 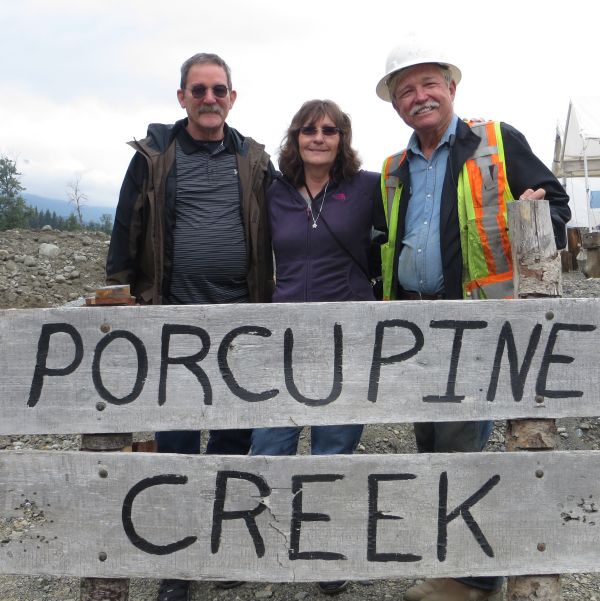 from Haines, and which is also posted on the tour site.  John and I were the only two people on this tour so I guess it’s not too heavily advertised or well-known, but that made it great for us, as our tour guide Holly is this really personable woman with a lot of knowledge about the area, and we had her and Fred all to ourselves.  He taught me how to pan gold, and he also told me I was not to blow his cover and let people know what a really nice guy he actually is. Of course he’s a Texan too, so  he may have just liked hearing our accents.  Whatever the case it was a really fun day and getting to spend so much time with Fred and Holly just made it better.
Did we get gold? You know it.  I didn’t get mine weighed up, but we also went panning in Fairbanks a few days later, and I got quite a bit less there and it weighed up to $18.00.  I mixed it with the Porcupine Creek gold and have it in a small glass bottle.
If you happen to be lucky enough to be taking a cruise to Alaska, this is one tour I’d seek out.  It isn’t one that the cruise lines will sell you and I’m not certain how long they will continue to offer it but you can always check out ShoreTrips to see. I DO know it’s not offered in the winter months. 😉