If you grew up in the USA when they were still teaching literature in school you probably read or were assigned to read “To Kill A Mockingbird” by Harper Lee. I have always loved the book and also the movie starring Gregory Peck as Atticus Finch.
July 8th, 2014 Audible released their version of the book narrated by Sissy Spacek. I had it on my waiting list and downloaded it that night and stayed up a few hours later than normal, listening. So much wisdom in so few pages.
Here are a few of my favorite quotes from the book and images from the movie. The scenes don’t necessarily appear with these quotes but I think they fit well. To Kill A Mockingbird never grows old.

Atticus Finch: If you just learn a single trick, Scout, you’ll get along a lot better with all kinds of folks. You never really understand a person until you consider things from his point of view… Until you climb inside of his skin and walk around in it.

Atticus Finch: Good Afternoon Miss Dubose… My, you look like a picture this afternoon.
Scout: [hiding behind Atticus whispering to Jem and Dill] He don’t say a picture of what.
[to Dill about Miss Dubose]
Jem: Listen, no matter what she says to you, don’t answer her back. There’s a Confederate pistol in her lap under her shawl and she’ll kill you quick as look at you. Come on. “I think I’ll be a clown when I get grown,” said Dill. “Yes, sir, a clown…. There ain’t one thing in this world I can do about folks except laugh, so I’m gonna join the circus and laugh my head off.” “You got it backwards, Dill,” said Jem. “Clowns are sad, it’s folks that laugh at them.” “Well, I’m gonna be a new kind of clown. I’m gonna stand in the middle of the ring and laugh at the folks.” “Well, after Jem yelled we walked on. Mr. Tate, I was shut up in my costume but I could hear it myself, then. Footsteps, I mean. They walked when we walked and stopped when we stopped. Jem said he could see me because Mrs. Crenshaw put some kind of shiny paint on my costume. I was a ham.” Scout: Why there he is, Mr. Tate. He can tell you his name…
[Looks at the man]
Scout: Hey, Boo.
Atticus Finch: [making introductions] Miss Jean Louise, Mr. Arthur Radley. I believe he already knows you.

[about Jem]
Scout: You can pet him, Mr. Arthur. He’s asleep. Couldn’t if he was awake, though; he wouldn’t let you. Go ahead.

Older Scout: [narrating] Neighbors bring food with death, and flowers with sickness, and little things in between. Boo was our neighbor. He gave us two soap dolls, a broken watch and chain, a knife, and our lives. 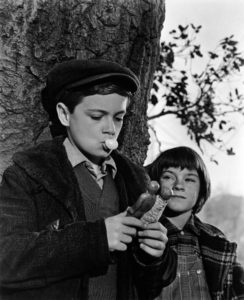 “Shoot all the blue jays you want, if you can hit ’em, but remember it’s a sin to kill a Mockingbird.”